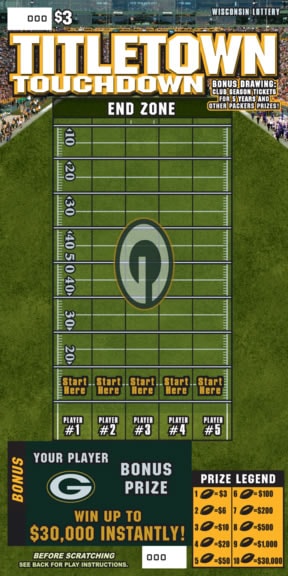 Win up to $30,000 instantly!
Eligible for the Packers Bonus Drawing!

GAME DETAILS:
1) Count up all the "Football" symbols in the ticket's play area to determine prize won.  For example, if there is one "Football" symbol in each of the five PLAYER lanes, that would be a total of 5 "Football" symbols and the ticket would win $50.
2) A ticket can only win the highest prize shown in the PRIZE LEGEND corresponding to the total number of "Football" symbols found in all the revealed paths.
3) For the BONUS, the PLAYER whose lane does not contain a "Tackle" symbol is the one that "reached the END ZONE."