Please note these are historical figures and may include numbers that are no longer offered in the current game.

HOW TO PLAY MEGABUCKS

HOW TO WIN MEGABUCKS:

*The prize money allocated to the JACKPOT shall be equally divided by the number of plays correctly matching all 6 numbers. JACKPOT winner has 60 days from date of ticket validation to select either the annuity payment method of 25 annual installments or the cash option payment method. A cash option JACKPOT prize will be equal to the total cash held for the JACKPOT pool, which will be less than the estimated JACKPOT. JACKPOTS not won will be carried forward to the next drawing. Prizes up to $599 may be claimed at a Wisconsin Lottery retailer. Prizes $600 and over must be claimed at a Lottery office or by mail. Prizes $200,000 or over must be claimed at the Madison Validation office. Tickets, transactions, and winners are subject to state law and Lottery regulations. Purchasers must be at least 18 years old. Megabucks prizes not claimed within 180 days after drawing are forfeited.

Follow the links below for more details on the Megabucks Lotto game:

HOW TO WIN INSTANTLY WITH EZ MATCH:

Megabucks offers a chance to win NOW and LATER for an additional $1!

When EZ Match is selected, five EZ Match numbers and instant prize amounts will print below the Megabucks numbers on the ticket.

WIN NOW by matching any EZ Match number to any Megabucks number on the ticket (not the numbers in the drawing) to win the corresponding prize amount shown instantly.

NOTE: Each EZ Match prize can only be won once. 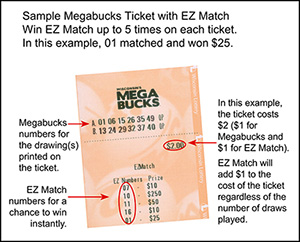 HOW TO CLAIM EZ MATCH PRIZES:

Any retailer can redeem the EZ Match prize on a ticket immediately after purchasing and give the player an exchange ticket for the Megabucks drawing. EZ Match prizes not claimed within 180 days after the ticket is generated are forfeited.

Follow the links below for more details on the Megabucks Lotto game: