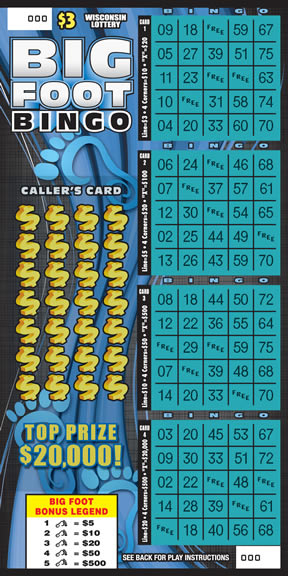 BONUS: Get one or more "BIG FOOT" symbols under the matched Bingo numbers in the Player's CARDS, win corresponding prize in the BIG FOOT BONUS LEGEND.

NOTE: Excluding BONUS BIG FOOT wins, a ticket can only win 1 prize on each CARD, but a prize can be won on up to 4 CARDS, provided that each CARD has a winning pattern.  Only the bingo numbers from the CALLER'S CARD can be used to reveal a "BIG FOOT" symbol on a CARD. A winning ticket can only win the highest prize shown in the BIG FOOT BONUS LEGEND for that same number of "BIG FOOT" symbols revealed in all 4 CARDS.