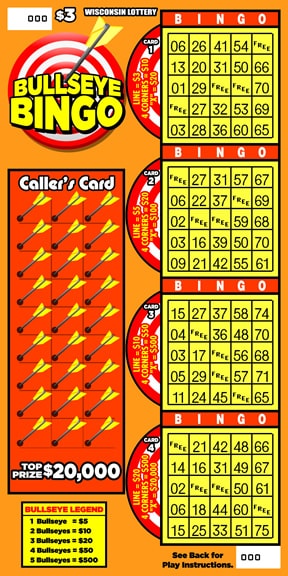 BONUS: Get one or more "bullseye" symbols under the matched Bingo numbers in the player's CARDS, win corresponding prize in the BULLSEYE LEGEND.

NOTE: Each winning CARD can only win the highest prize shown for that designated winning pattern for that same CARD.  Only the bingo numbers from the CALLER'S CARD can be used to reveal a "bullseye" symbol on a CARD. A winning ticket can only win the highest prize shown in the BULLSEYE LEGEND for that same number of "bullseye" symbols revealed in all four CARDs.