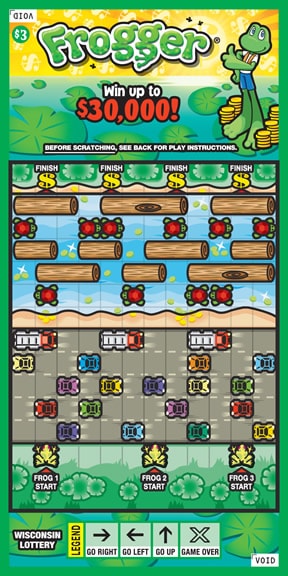 1. Scratch the FROG 1 play spot to reveal an arrow.
2. As shown in the LEGEND, continue scratching ONLY in the direction of each revealed arrow, one arrow at a time, to reveal the entire path through the play area.
3. If the path reveals a BONUS symbol, continue in the direction of the arrow next to that symbol (shown in that same square).
4. If the revealed path runs into a GAME OVER symbol, that path ends and the game is over for that FROG.
5. If the revealed path ends in a FINISH play spot, win the prize amount revealed in that same FINISH play spot!
6. Repeat steps 1-5 for FROG 2 and FROG 3.
7. Count the total number of identical BONUS symbols across ALL three paths (FROGS 1-3), win prize shown in the BONUS BOARD for that same symbol!